The working class is bearing the brunt of the major capitalist’s imperialist ambitions. From Ukraine, to Nigeria, to Yemen, and to Syria, the proxy wars being waged by the big terrorists using small time terrorists and religion as a tool are slaughtering workers on three continents.

The big terrorists and terrorist financiers in Saudi Arabia are now launching an all out air raid and have amassed over 150,000 soldiers on the border to attack the al-Houthi rebels that have control now of parts of Yemen. With 3.75 million barrels of oil a day passing through Bab-el-Mandeb every day at a value of over $217 million dollars, using the close of market on 3/27/15 value of $57.89 a barrel of crude, it goes without saying that the real enemy to the big terrorists isn’t the small time terrorists of Al Qaeda in the 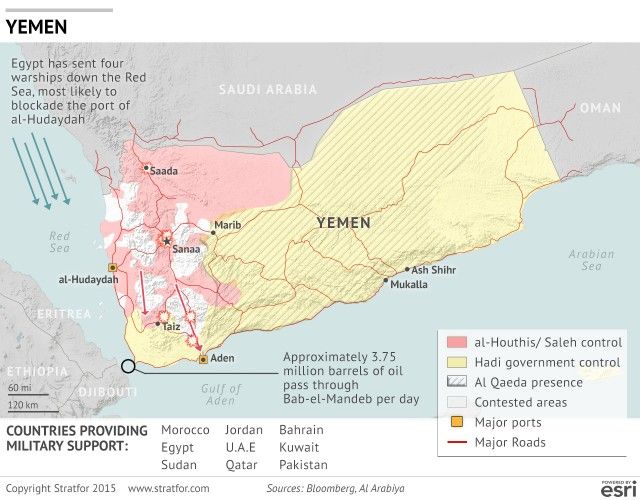 The imperialist big terrorists in the US and their brutes in Israel may be at odds right now over what to do about Iran, a part of the Russia and Chinese imperialist bloc, but that won’t interfere with a massive invasion potentially taking place just south of Israel’s pond. So, with fascists in AQAP getting caches of arms from taking over military bases and ISIS terror bombing workers, the murderous Saudi bosses determined that the real threat to their hegemony are the Iranian proxy Shia Houthis! The Saudi rulers didn’t get their forces together when thousands of workers in Syrian and Iraq were murdered, thrown in mass graves, and had their daughters as young as 12 given as sex slave rewards to and gang raped by ISIS holy warriors.

This leaves the major question on the table: Why is it that the Saudi led coalition is neither targeting AQAP nor ISIS? Why? Simple. In appearance, though they lend lip service against AQAP an ISIS, in essence, they are not opposed to that particular group of fascists. There are many rich Saudis who funnel money and support to Al Qaeda all over the world and there are many Salafists who see the Sunni jihadist fascists as a positive development, a bulwark, against Iranian expansionism.

We are now seeing another massive number of innocent workers getting ready to die on the grand chessboard of inter-imperialist rivalry as the US empire tries to cling onto power against the rising powers of China, Russia, and Iran. They would rather have their own bogeyman of ISIS that conveniently controls vast tracts of oil in the Levant, an area of the world that the US has attempted to control at the cost of over 2 million dead workers and untold destruction over the past 10 years. Defeating ISIS is a convenient rational that feeds the narrative of humanitarian imperialism that the US likes to justify its exceptionalism with. The US wants the oil that defeating ISIS would give them control of. It isn’t ISIS that the US wants to defeat with their neocolonial Iraqi forces, so much that they don’t want Iran, through proxy Shia militias, defeating them.

It will be the working class who suffer and die as one fascist dictator gets pushed out of Idlib by the fascists in Al Qaeda in Syria. It will be workers who die as bombs fall on poverty stricken and water starved cities in Yemen. It will be workers who die as they are ordered to kill other workers to benefit the capitalists who enrich themselves each and every day that big oil poisons our planet. And it will continue to be workers who die until it is the capitalists who finally pay when The Progressive Labor Party leads a Communist revolution that destroys profit once and for all, the primary reason for all of these proxy wars.