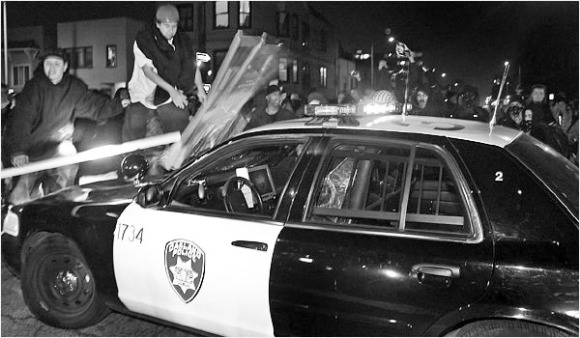 OAKLAND, CA, January 12 — On January 1, Oscar Grant, an unarmed 22-year-old black man, was murdered by a racist BART (Bay Area Rapid Transit) cop. Grant cried to the cop, “Don’t shoot me! I have a four-year-old daughter!” whereupon the cop shot him in the back while he lay on the ground, sparking hundreds of youth to rebel.  This state-sponsored execution-style murder is one of the latest examples of “business-as-usual” under the racist capitalist system.

On January 7, workers and youth held a protest rally at BART where the murder occurred. As anger grew, up to 500 people eventually marched from that BART station to downtown Oakland where a rebellion occurred. Youth attacked police vehicles and businesses along the route.

The murdering BART cop is part of a force for which Homeland Security allotted millions of dollars specifically to transit police in the rulers’ “war on terror,” now being turned into a racist war against black and Latino youth.
Many of the young people who marched for immigrant rights on May Day last year were present. The united anger of young people from all backgrounds was inspiring. Some held signs with Oscar Grant’s picture, linking his murder to the massacre in Gaza as the latest examples of state-sponsored terror. When Oakland’s black mayor Ron Dellums showed up, he was booed. When he pleaded for “calm” later at the rebellion, he was ignored. PLP’ers brought our class analysis and internationalism to the protest and distributed CHALLENGES.

The rally’s open mike heard most speakers call for a calm protest, requesting a “police oversight commission.” But angry youth called for action. One youth declared, “This isn’t just a black thing, all of Oakland needs to unite and do something about it.”  Another young man said he “would personally organize a riot if the cop wasn’t convicted.” Thuyen Tran, 24, of Vietnamese descent, despite the damage to his family’s business, said he understood the protesters’ anger: “It doesn’t make sense,  using brutal force. It doesn’t feel good because No.1, I’m a minority, and No 2, I’m a young kid.” (NY Times, 1/8/09)

All these comments contained the seed of a class analysis about the difference between state-sponsored, institutional violence from the police and violence among youth due to being saturated with divisive capitalist ideas. They present an opportunity for PLP’ers to raise with co-workers and friends that pacifism towards the police won’t stop cops’ violence (nor gang violence). Only developing class consciousness among young working-class people will do that, understanding that they are all in the same boat, and have a common, often violent, class enemy that controls the government and uses the police to repress workers’ opposition to ruling-class oppression.

Whether through unemployment or underserved schools and resources, capitalism has always marginalized black and Latino youth. The large, militant response to this murder shows that these youth are a potential force for rebellion. However, they need to see the connection to the overall capitalist system, which depends on racist super-exploitation for super-profits.

It is precisely these angry youth who the ruling class wants Obama to divert away from rebellion against racist oppression into patriotic “national service” to fight in U.S. imperialist wars. (See editorial front page.)
As the bosses’ economic crisis deepens, continued attacks here and abroad will intensify. The current massacre in Gaza reflects what this system has in store for the working class worldwide.

This protest showed the need for communist leadership to develop this kind of analysis among these youth. We must step up our participation in the community organizations in and around Oakland and build our influence on our jobs, in our unions and in the schools and not be caught off guard. Calling for strikes on the job against these police-state murders is more relevant in light of this rebellion.

Just as we saw in Greece, where the working class was already in motion against austerity measures and was inspired by the action of young people, this rebellion here shows that the working class is smoldering and impatient, that working-class-wide unity is possible.

The door is wide open in these events when we go with our friends and co-workers. Oscar Grant’s murder has outraged vast numbers worldwide who know the intimate details from the internet. To go from outrage and rebellion to class-conscious, planned, working-class-led revolution is a long process. It requires a communist party — PLP — active among workers and youth to lead to this goal.